Macarons Are Not Macaroons - Part 3, Not the Final Chapter

Our macaron making day finally came. My friend Denise and I excitedly went to the class location on Dundas St. W. We arrived early, parked and enjoyed a chat over a latte. Shortly before eleven, we ventured to Le Dolci where other eager participants, all women, were donning their pink aprons and  talking with the instructor, patisserie chef Eyal Liebman.
﻿
﻿ When Chef Liebman asked who had attempted macarons before, most of the hands went up. We laughed when he said, (with French accent) "Ah, that is why you are all here."

We listened, we watched, we asked questions, we learned. Chef Liebman explained and demonstrated. Some people took notes, some observed, some participated, and some daydreamed while visions of macarons danced in their heads. 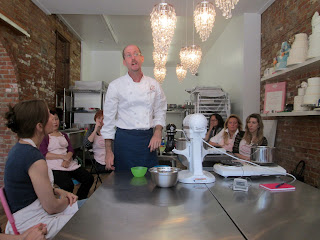 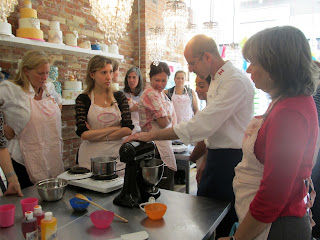 Measurements and instructions were posted on the wall. We were using an Italian macaron recipe and it was slightly different than what we'd tried at home. This method involved boiling sugar and water, using a thermometer to get to the correct temperature and then gingerly pouring the syrup into the egg white mixture. 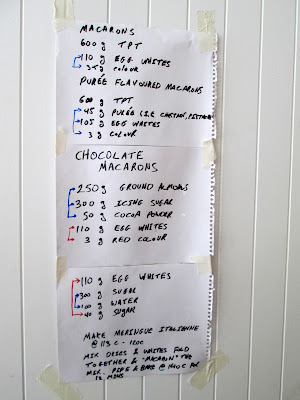 Almonds and powdered sugar were then added and the mixture stirred rigorously until the dough, when left for about seven seconds flattened smoothly back in the bowl. It is important not to overmix or undermix at this point. We then received instruction on how to pipe the dough onto templates on the baking sheet. 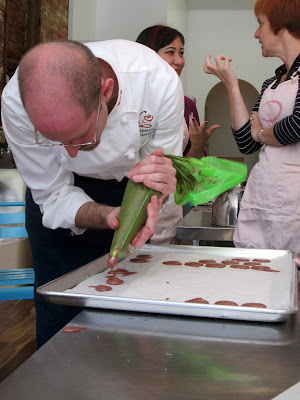 Denise and I learned that when we worked at home, our almonds were not sufficiently ground and that they should have had a more floury consistency. We had also not beaten our egg whites enough. This is how they should look when ready. 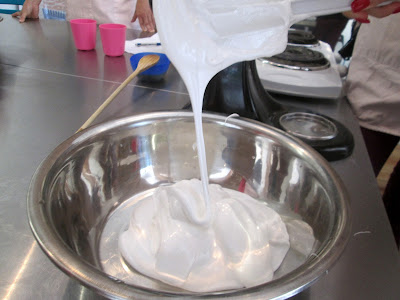 We then divided into groups to make our own macarons.. The three resulting batches looked like this.
Batch #1 (Chocolate) Created by Chef
﻿ 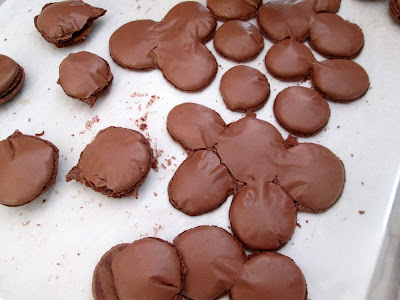 Not quite right but then some were piped by students. Nonetheless, they were filled with ganache and sandwiched.
Batch #2 (Pistachio) Created by Group 1 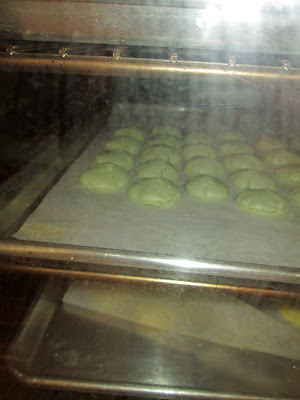 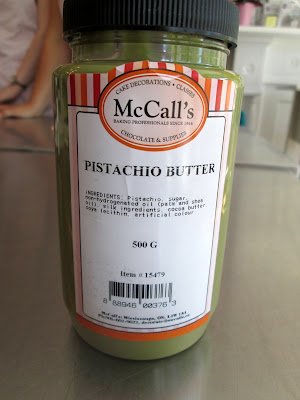 These cookies were a bit of a disaster. The pistachio butter from a bakery supplier was blamed and the chef informed us that he personally uses pistachio paste from Spain. Neither option (supplier or Spain) were amateur cookie maker friendly suggestions. The cookies cracked while baking and were not filled and sandwiched.
Batch #3 - (Plain) Created by Group 2 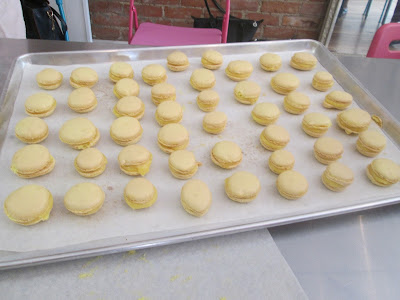 These turned out quite well. Except for some piping issues which created a few deformed cookies, they all rose nicely. They were filled with lemon curd and sandwiched. Denise and I were involved in making these. Clearly, our previous at home practice helped with our effort. 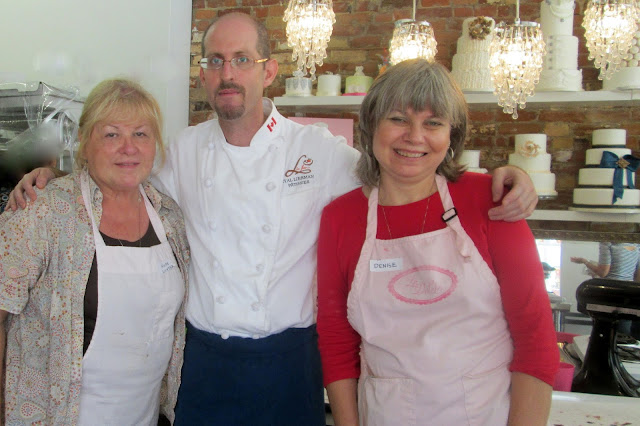 We were unable to determine whether the chef was impressed with our efforts or whether he was just relieved that it was all over. You be the judge.
After the course, Denise and I talked over lunch and planned another macaron home baking session. We are feeling much more confident that our future efforts will not resemble feet, acorns or tongues. I've even found a great new recipe from Canadian Living magazine and I'm looking forward to one last kick at the can.
http://www.chatelaine.com/recipe/cookies/pistachio-cream-macarons/
Posted by Hilde at 8:55 PM